TMy health issues are getting me out of breeding, so our stallion is for sale. Jack is a minimal white, bay tobiano stallion by leading AQHA sire, Lazy Loper, and out of a top 10 NSBA World Show western pleasure APHA mare, MPH Macs Good N Pleny, who is by leading sire, Macs Good N Plenty. Jack is NOT AQHA registered.

Jack is 5 panel and OLW negative. We believe he carries nd1 (non-dun primitive markings) as he has a dorsal stripe and produces multiple offspring with nd1. We also think he carries rabicano, which cannot be tested for, but he has a number of offspring with roan ticking and coon tails.. He is homozgyous black and agout, so will never produce a red based foal. He throws a lot of very minimal white offspring for us.

Jack is broke to ride and had quite a bit of professional training as a two and three year old, but he was never shown. He has not been ridden for the last few years but probably wouldn't take long to get him back to work. He is sound and has no health issues, blemishes or injuries. Jack has a low motor, is very non-spooky, and has no vices. He is easy to catch, loads and hauls well, is good to vet and collect, and he is non-aggressive. I am a middle aged amateur with arthritis and I handle him on a daily basis. Yes, he's a stallion, but he has been a safe and pleasant stallion for me to work with.

Jack has been a great producer for us. His foals tend to be very pretty with the famous Lazy Loper forelock, big soft eye, and very correct conformationally. His foals are in general quiet, people orientated and non-spooky. His offspring have show records APHA, Pinto and PAC in a wide variety of classes, plus he has produced a number of futurity winners and stake winners. His latest successful offspring is Lazy Specialty, 2017 bay tobiano gelding, who won Alberta's 2020 CCF futurity in 3 year old Hunter under saddle on Saturday, followed by winning the 2020 CCF 3 year old Western pleasure class on Sunday, ridden by a 13 year old girl against multiple trainers!

Jack breeds live cover, and also collects off phantom or jump mare. The vets love him - he is safe and non-aggressive and gets right to his job! His cooled semen ships wonderful, and we have also froze a bit of semen and that appears very good as well. In the winter months we run Jack with his bred mares, and he is good in the herd, and minds his manners. Jack is not hard on fence, and has no vices.

Jack is not a tall horse. He stands just under 15 hh, but has a lot of body, and has been produciing good sized foals for us when bred to medium sized mares.

We are asking $15,000 US ($19,000 Canadian) for Good N Lazy. Price includes Coggins, International Health Papers, plus we will haul up to five hours to Montana to meet a shipper. Please keep in mind that due to Covid we cannot take him across the Canada/US border, but commercial shippers can still haul horses across without problems.

We have multiple video and extended pedigree on our stallion page, please check him out and then get back to us if you have any questions on our boy. The first video was taken when Jack was a green two-year-old under saddle. The second video is Jack, later September 2020.

​He is a good horse and it's going to be tough to say goodbye. 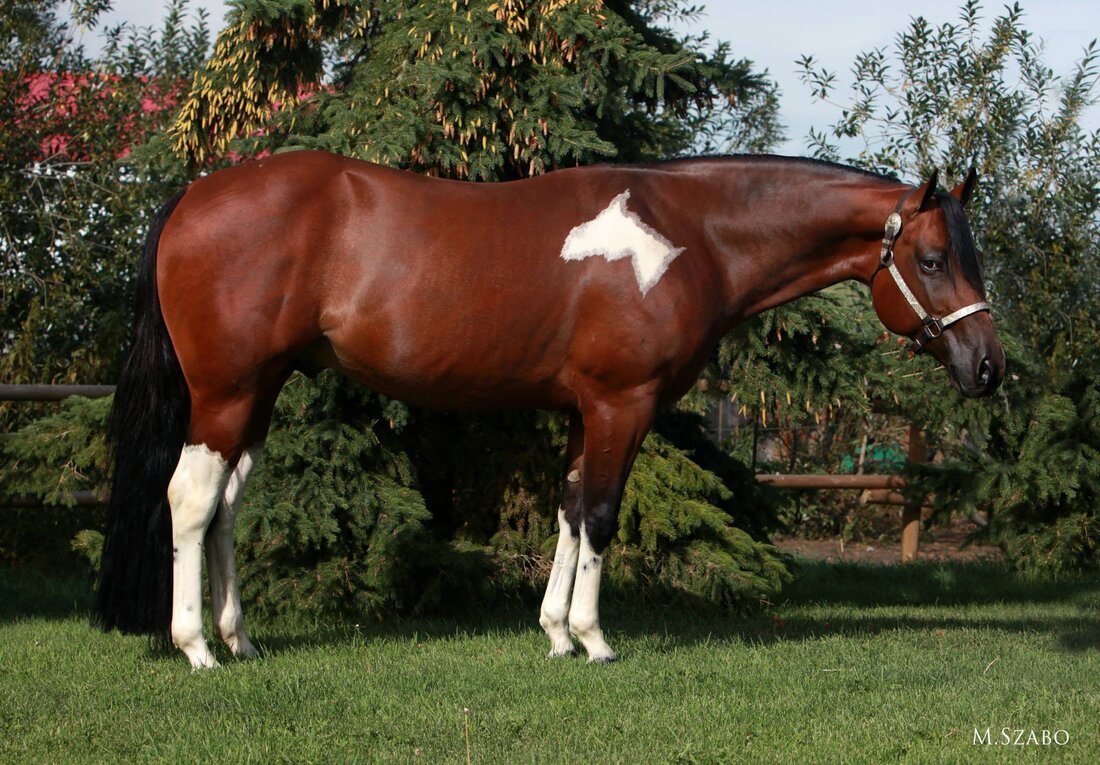 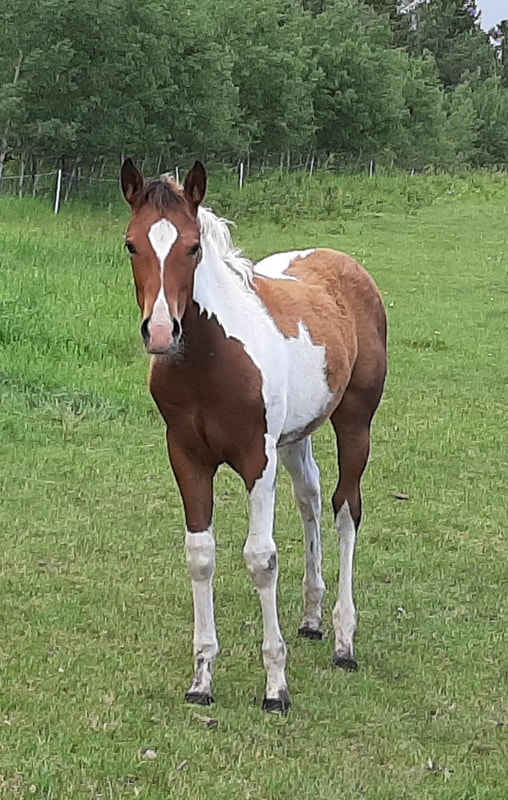 This is the first foal for Shelby, 2013 bay tobiano mare. Shelby is by leading APHA sire, Special Invitation who is by Invitation Only. Her dam, Krymsun N Satin, is by 3 X World Champion, One Hot Krymsun, and out of Reserve World Champion, Zippos Satin N Lace, who is currently #1 on the APHA leading dam mare list  as she has produced offspring earning over 14,000 points. We expect Harper should finish 15.1 to 15.3 hh. We've seen her jog and lope and she looks like a good one! Her dam, Shelby is a beautiful mover who can jog and English trot as well, and she has a stick straight front leg at the lope. Check out her video on the mare's page!

​We currently have two short video clips of Harper, and will be getting better video when the snow finally melts and we can use the outdoor arena. Asking $3500.00 US, $4500.00 Canadian currently, price may change if exchange rate changes drastically.. That price will include Coggins and International Health Papers, border vet check, and myself hauling up to 5 hours to meet you or a shipper. Commercial shippers can still haul from Canada into the US - so don't let this virus stop you from buying a great filly! Contact me for more info. 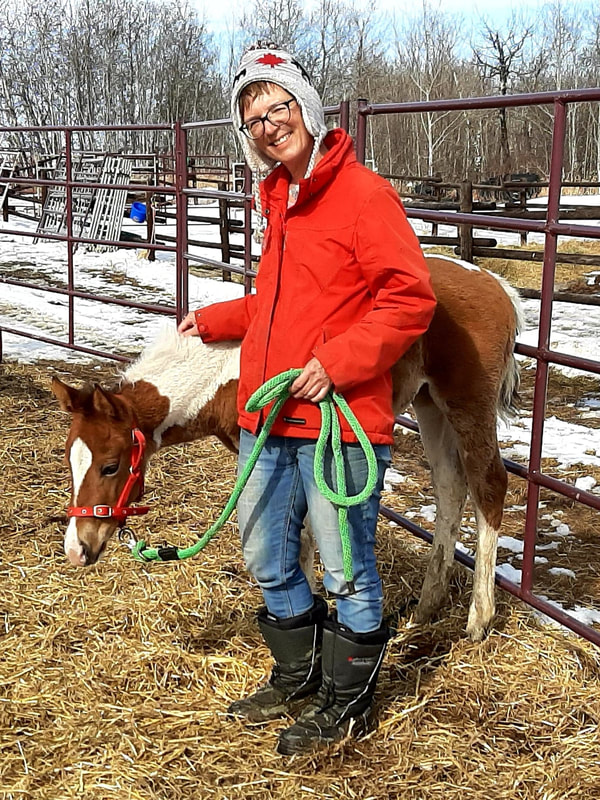 For sale: Red White N Lazy (Joy), bay tobiano mare by Good N Lazy (Lazy Loper X MPH Macs Good N Pleny) and out of Invite The White (Special Invitation X R Fancy This).  Joy was born and raised here - and we will be sad to see her go.

Joy was lightly shown as a yearling, competing in Open and Amateur In-hand trail once at the APHA level, bringing home some decent placings. She was also shown at a couple of Open shows in showmanship, halter and in-hand trail. She earned 3 points in showmanship competing against mature horses, and went Grand Champion halter horse once and Reserve Grand Champion at a different show.

Joy had the year off as a two-year-old, with a few rides in December of 2019. She then went into training with Nicole Gauthier of La Plaine Quarter Horses. She had 60 days there, walk, jog and lope, then came home and has had another 60 days riding with me. Joy is still green, but making steady progress. She has been started on trail obstacles, plus showmanship. She is framing up, sidepasses, pivots, counterbends, backs.  She is a beautiful mover, with lots of natural cadence and rhythm and a fabulous hock!

Joy's dam, Invite The White, earned 43 Open lunge line points plus won the Ohio State Lunge Line futurity. Invite The White is by leading sire, Special Invitation, and out of multiple superior mare, R Fancy This, who went on to produce offspring earning 14 World or Reserve World Championships including Lopin Lazy and Krymsonized.

Joy is growing and bum high right now. We expect her to finish 15 to 15.1 hh. She is a very pretty mare - correct legs and nicely shaped feet, short strong back, and a beautiful head with big soft eye and the Lazy Loper forelock!  She is 5 panel and OLW negative, carries tobiano genetics and is homozygous for black and hetrozygous for agouti. That means she will never produce a red based foal, and can produce black or bay offspring.

Up to date with inoculations and worming, wearing front shoes while in training, and had her teeth done fall 2019. No health or soundness issues. No vices, she is easy to catch, has grown up in a small herd, ties and is good with her feet, and loads and hauls well.

$8500 Canadian, $6500 US, price will increase if she goes back in full time training. New video and photos to come soon.
​You can see Joy's sire on the stallion page, her dam on the mare page, and Joy's baby pictures in the 2017 foals page.
​
​ 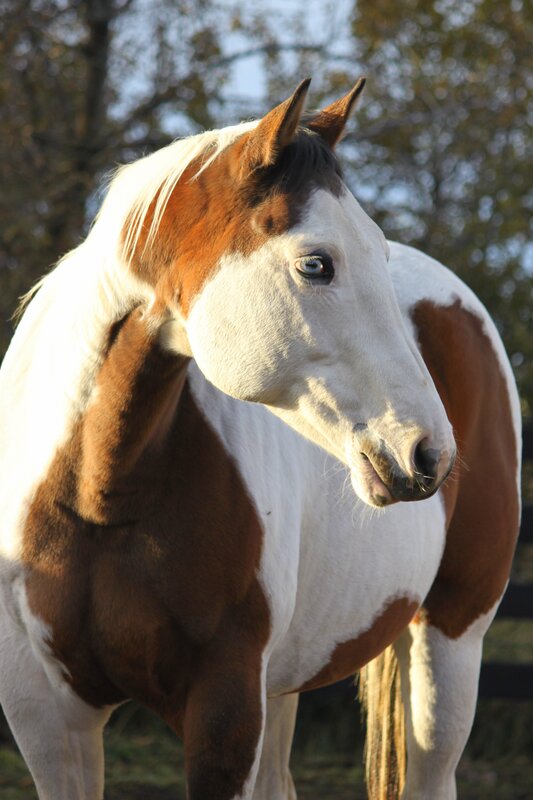 I have owned this mare since 2012, and she has been the cornerstone of my breeding program. I don't want to sell her - but I have some health issues that are making the chores and extra work from raising foals difficult. Please check her out on my mare page - I have many photos, extended pedigree and a lot of information on her bloodlines. Here is a really condensed version of that information.

Hope earned 43 Open lunge line points as a yearling plus won the Ohio State Lunge Line futurity. She was injured when started as a two-year-old and never had the chance to compete under saddle. She has one full sibling, Invite This, who has earned over 800 western pleasure points plus was Reserve World Champion in western pleasure. We feel Hope could have done the same if she'd had the chance.

The genetics on this mare are impressive. Her sire, Special Invitation, has been in the top #3 for APHA performance stallions for many years, he is by AQHA leading sire, Invitation Only.

The dam side is equally impressive with Hope's dam also being on the leading dam APHA list. R Fancy This is a 3 times superior mare who went on to produce offspring earning 14 World or Reserve World Championships. Several famous foals by R Fancy This are Lopin Lazy (4 X world champion) and Krymsonized.

Hope has produced a total of 10 offspring. She has been 100% colour producer, producing overo, tobiano and tovero foals. (One foal is registered as SPB but DNA testing shows that foal was a minimal overo, and if the owner wanted that mare could now be in the Regular Registry) Her foals are exceptionally good movers, we would be happy to share video of offspring if you'd like.

She is 5 panel negative but does carry frame overo (overo lethal white), she also carries tobiano genetics as a tovero. She is a smallish mare standing around 15 hh.

Hope does have a few quirks, and we will share these with you if you are interested in her. For example, she is a bit claustrophobic and does the best when hauling if she rides in the back stall of your trailer. She is easy to catch, sound and healthy, ties, baths and is at the bottom of the pecking order in the herd. She is in good weight and health.

Open for 2021. We bred her, she surprised us by not catch (a first!) and it was getting late in the year so we thought we'd give her the year off and breed her next spring. She's available as an open mare if you are interested.

YouTube video below was produced this summer, when we were preparing advertising for Hope's 2020 bay tovero filly, Lazy N Wonderland. While the video wasn't made with the thoughts of marketing Hope, it does show how she moves currently.
Powered by