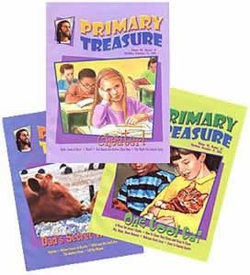 The very first paycheque I ever earned writing was in 1998 when I had an article printed called "It's Ruining my Life" in Primary Treasurer, a children's Christian magazine. I can very clearly remember the excitement of that first cheque, and the even bigger excitement of seeing my writing in print - with a picture to accompany the story, no less!
At that time my girls were eleven and eight years old. In fact, that's what made me think of trying to write for Primary Treasurer - my daughters were reading the magazine and enjoying it. I remember looking at some of the stories and thinking "I can do that".
I wrote articles about almost everything; girls who hate their glasses, stolen hockey cards, being a Christian at Public School, naughty puppies, and problems when riding your horse. I wrote for Primary Treasurer until 2002, and then book writing started to interfere with magazines. In that time I had about 50 articles published, each paying $40 to $50, which seemed pretty good for an 800 word story.
Primary Treasurer was the inspiration to my book writing. I had submitted two chapters of "Prince, the Pony" to Primary Treasurer's editor, Aileen Andres Sox, hoping she would use them for a continuing story in the magazine. Instead she suggested the stories become a book, and urged me to get into gear and write.
I haven't written for Primary Treasurer for years now, but I still get the occasional paycheque from them. Many of my articles are now being reprinted for a whole new group of children who didn't read them the first time around!

Guide and the Adventist Review magazines 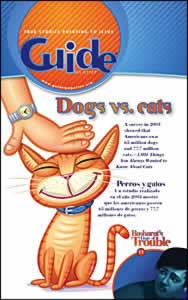 Guide is a Christian youth magazine produced by Review and Herald for their early-teenager group. It features true stories, often told in witty form. In the 1990s I sold half a dozen articles to this magazine. One of my favourite featured a herd of buffalo running down our lane, scaring Danelle and I up on a pile of bales, and eventually being contained on our property. True story. And you thought nothing interesting ever happened in the country!
I also sold several articles to a Seventh-day Adventist magazine called "The Review". I think the review paid $100, guide was $60. The most exciting thing about being published in the Review was all the comments I got from friends and family who were subscribed to the magazine. My articles certainly weren't deep or complex, but there is a certain amount of prestige when being published there as many of the writers are pastors, educators or experts in their field.
The only field I'm an expert on is hay, and even then I'm not so sure!

In 2008 I was newly subscribed to Horses All Magazine, an Alberta equestrian newspaper that was printed on a monthly basis. As a youth I had read Horses All, but it had been mostly a classified ad type paper. Since then its focus had changed. One of the paper's offers was free space for local horse clubs to print their monthly news. The Alberta Paint Horse Club was one of the associations that used this feature, and club members could subscribe to the paper at a reduced rate.
I wrote several APHC club newsletters in 2008, and then was released from my job after some tension between myself and an executive on the paper. It was disappointing for me, and also a bit embarrassing - I had considered myself a writer and they had decided someone else (a member of the executive) should do the job because I wanted to write about things that didn't interest them.
Later in the year I had a sudden inspiration. I had been frustrated in the warm-up pen at a local APHA show - it was crowded, no one followed any safety rules, and I felt as though it was an accident waiting to happen. I knew this was common at many breed shows, not just for Paint competitors, but I had never seen an article on the topic. So I decided to submit one to Horses All, having no idea if they accepted "free-lance" writers, and if they did, how much it would pay.
Later that week Sherry Butt, the new editor at Horses All contacted me, stating they wanted to print the article, and did I have any photos that could accompany the topic? I didn't have pictures of the warm-up pen (I was always too busy riding to be taking photos!) The magazine published the article anyway, and when I discovered how well they paid for "experienced writers" I was hooked.
Since that time I have sold over 150 articles to Horses All (as of the end of 2011). Most of my articles have been free lance on topics such as "How to bath your horse in 500 easy steps", "Touring the Ottawa RCMP Musical Stables" and "A Day in the life of an equine judge". I've also had a regular feature on Alberta equine businesses and ranches called "Horses All Places", where I would interview various local breeders or horse businesses.
Horses All has also given me a number of assignments on specific topics, and I've also done some advertising articles for them. And in 2009 I attended the Red Deer Mane Event as part of the press, and did nine articles for a special feature. Now I take my Canon Rebel camera to most equine events (even if I am riding at some point in time) because I am often able to sell photographs to Horses All to accompany my articles.
The sales from all these articles have allowed me to buy my Featherlite horse trailer, send Patrick to full-time training, and pay for my horse shows. The big disappointment of being let go by APHC's free club newsletter was more than compensated by the generous cheque that Horses All has provided me these last few years.
It just goes to show that God can bring good from things that seem like disappointments at the time!